Life in Morrisburg was like that of most villages until the construction of the St. Lawrence Seaway. River traffic had used canals to bypass trouble spots for over a hundred years but the twice-expanded locks were again inadequate as ship dimensions grew and demand increased for deep water access to the Great Lakes. The shallow, narrow, rocky waters between Cornwall and Cardinal had perilous rapids and a particularly speedy current in the narrows near Iroquois.

The solution? Cover it all by raising the water level. A control dam was erected at Iroquois and a power dam at Cornwall; the gates were opened and the level of the St. Lawrence River rose. It submerged several villages along its shores, including a portion of Morrisburg, creating a new topographical feature known as Lake St. Lawrence.

There are many sites dedicated to the story of the Seaway, notably the locally managed lostvillages.ca and stlawrencepiks.com , and it is not within the scope of this space to review these details.  Instead it focuses on the fascinating dive sites that the project unknowingly produced at Morrisburg.

The Streets Beneath the Water

To understand the location of the dive routes and their proximities to shore, it helps to see which areas were flooded and how it has produced the map we know today. I’ve sketched the modern shoreline over the shoreline of 1959, and included the main landmarks of both times. Today’s shoreline and parkland is  green. The 1959 shoreline and town area is turquoise blue. 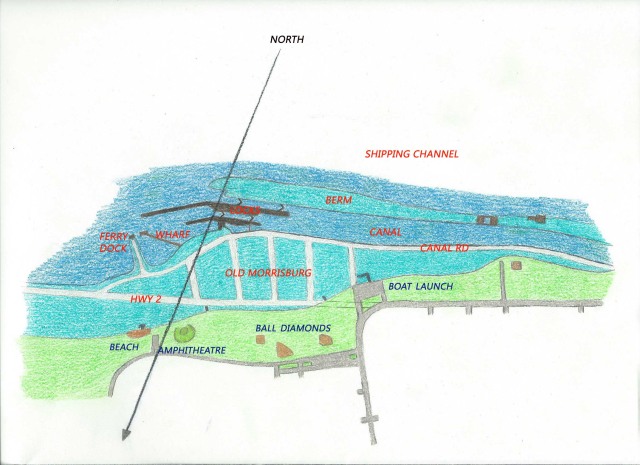 We think of the locks as running parallel to the shore, but they do not. They get farther away as you proceed downstream, so the exit is more distant than the entry. For divers this means planning for a longer swim home plus saving enough air for the trip.

The submerged section of town had residential streets plus an adjacent area crammed with docks and boathouses, all of which were bulldozed in preparation for flooding. What remains of this area is a vast space of small boulders, debris, and growing weeds, never deeper than 12-15 feet and shallower as you approach shore. Maximum depth in the locks themselves is about 40 feet.

The total downstream distance of the drift is 700 m/2300 ft. Most divers spend 50 to 60 minutes underwater.