The route to the “new” lock is the farthest from shore but also the simplest. It’s therefore the one that most divers take if they’re new to the site. Instructions they’ll have received might be…

It’s an oversimplification and you’ll miss many of the historical details, but it gets you safely through the site and you’re unlikely to be confused by your location.

Once you’ve entered and found your way to the canal (see this post), continue swimming south until you get to the wall.  You may think you’re swimming too far into the river with no end in sight… but fear not… the wall will show up! It’s easier crossing the current if you move along the bottom. The dark wall looms up in front of you at about 7 minutes. 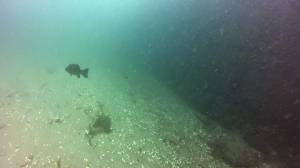 At a depth of about 40 ft, you’ll coast alongside its massive limestone blocks for another 10 minutes or so until you reach the concrete sill of the lock’s upstream gates (the gates are no longer there). You’ll have lots of companions along the way – bass love to swim with you.

Here’s the sill just ahead.

You may not have noticed the speed of the current much but you certainly will if you attempt to grip the sill’s edge to steady yourself while you wait for your friends!

You now have 3 options:

1. You can continue drifting along the south wall and over the downstream sill, noting the drop in river depth as you go over it, until you reach the end of the wall. You’ll notice it curve to the right. If you follow this curve (south), you’ll get into the deeper waters of the shipping channel.  Instead, turn north and cross the lock (45 feet wide) to its north wall.

November 2015: at this time I don’t have photos of this yet… they’ll have to wait until next season.

2. You can cross the lock now, using the upstream sill as a guide. It’s easiest to cross at the canal bottom, grasping the sill if you wish (although there isn’t much to grasp…). 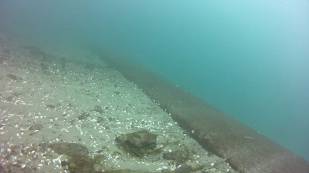 As you come up to the north wall, observe the cables of the gate mechanisms that are recessed in narrow slits in the wall on either side of the sill.

3. You can cross the lock a little higher in the water without using the sill. The current will carry you downstream a bit as you move across. You’ll probably get to the inner wall about midway down the lock. This lock is 270 feet long so there’s lots of breathing room!

Whichever way you choose, you’ll soon reach the inner wall. You can drift along it at the top, the bottom, or anywhere in between.

If you drift midwater along the side of the wall, you’ll note the huge limestone blocks, with big angled indentations to allow the gates to close flush with the wall itself. You’ll go past more “cubby holes” (more about these in another post to come) where pulley mechanisms came through to attach to and work the gates.

At the end of the lock, the wall you’re drifting alongside angles inward and changes to wood. This is the approach pier where ships waited for their turn to use the lock. Structural details of the cribbing are interesting and there are a fair number of cold water sponges (I think – though would welcome confirmation or correction) attached to the walls. When you reach the end of the pier, you’ll see its “corrugated” iron wall.  (Sorry, no photos yet of this. Be patient.) At this point there’s nothing downstream but river bottom so it’s time to head north to shore.

You can also ascend to the top of the wall which sits about 12-14 feet below the surface – this is the upper level of the lock and it is described in this post. You’ll be whisked past large bollards (the mushroom-shaped posts that ships moored to) and knocked-over light standards. Originally grassy, the base is now small rocks and weeds bent nearly horizontal by the force of the current. When you reach the end of the lock area, you’ll drop 12 feet to the downstream approach level and be carried along the concrete-covered top of the wooden approach pier. Drop over the corrugated iron edge at its end, collect your buddies, check your compasses, and head north.

You are a long ways from shore – it will be about a 15-minute swim in. Keep north as your compass heading, and stagger yourselves as you cross so that any silt you kick up will not ruin the visibility of those behind you.  The first half of the swim will be at about 35 feet over smooth silt. The second half will be through weeds.  More about these in this post.

The old Highway 2 sits at about 13-15 feet and is a perfect place to complete your safety stop. If you pace yourself “just right” and keep your compass heading “just right”, you will surface at or near the beach. Be vigilant in putting up a surface marker buoy for the last section when you are in shallow waters – there may be lots of boat traffic overhead.